Many of our members come from all over the world, and all sorts of local lore influence their writing and ignite the imagination. We asked JL Writers to submit their top creepy creature in celebration of the Halloween season. Read on to see a spooky selection of mythological monsters and creepy tales from around the JL world!

The tatarimokke is the spirit of a dead baby that possesses an owl, looking no different than any other owl, haunting the house where it once lived. If a family loses a child, they will care for any owls near the house in case one is a tatarimokke being possessed by their child’s spirit, and so the tatarimokke does not cause any misfortune for them. However, the spirits of children who were killed by their parents or of dead babies whose bodies were carelessly discarded in a river. People passing through areas where these vengeful spirits dwell will often encounter misfortune. And if a child is the victim of a murder, he or she will haunt the murderer to take revenge.

Japan is full of these legends of creatures, gods and spirits that inhabit the natural world. There’s no proof that these demon-like creatures exist, but there’s no telling if you’ll meet a kappa next time you go out for sushi and eat cucumber rolls. Is the rock you tripped over on your walk just the result of clumsiness, or is it the curse of the tatarimokke owl behind you…?

It’s a Canton mythological creature that looks like a raw fish, but it has 4 hidden legs. Each leg has 5 claws. Legends say that for every new fresh fish born, a bone dragon lives inside it.

The worst part is, when you eat a bone dragon or drink the soup made with it, all your bones will dissolve and you will die. However, Cantonese people love to eat fresh fish, so they will repeatedly slam the fresh fish on the counter top until it is unconscious. This procedure is called “tat sang yu” (“sang yu” is Cantonese for “fresh fish”).

Okay, the real reason for slamming the poor fish is to make it easier to dissect it for cooking or other culinary purposes. An active fish is hard to cut up, like it’s hard for a parent or teacher to make an active child settle down. (Of course, I won’t want to have to make a child faint to plop him or her on a seat.)

But what does slamming the fish have to do with the bone dragon? It turns out that by doing so, the hidden legs of the bone dragon will appear, and upon seeing those feet, the Cantonese will throw the dragon away and hope they have better luck with fresh fish next time.

There is actually news coverage on the bone dragon. In the 1950s, families died because they drank bone dragon soup by accident, and in 1983, it is claimed that someone found a bone dragon while slamming fresh fish.

Speaking of active children, though, (and I encounter them daily!) some parents actually call their kids “bone dragons” precisely because the little ones take up so much of their time and energy that they feel like their own bones have dissolved, and that these adults don’t have a life any more.

The legendary Beast of Bodmin has been striking fear into British hearts since the 1970s. Bodmin Moor in Cornwall has many myths and horrors associated with it, brought on by the wild bleak landscapes, but the most famous of all is the Beast.

Many reports of a black panther-like cat have been made over the years, along with reports of mutilated livestock. The anecdotal evidence formed such a strong case for the existence of the Beast, that the British government ordered an official inquiry in 1995. No verifiable conclusions were made, although it appears there is no evidence against, either. The Beast could be out there still.

Sightings still occur, from a young boy who found a leopard skull on the moors, to various newspaper reports of wild cat viewings in the area. Many reports are proven false, but not all. Wild speculation exists about how the beast was released onto the moors–an escaped zoo animal,  or the remnant of a long-extinct big cat species?

Who knows whether the Beast is real. Either way, I won’t be taking a trip to the moors in the dark to find out… 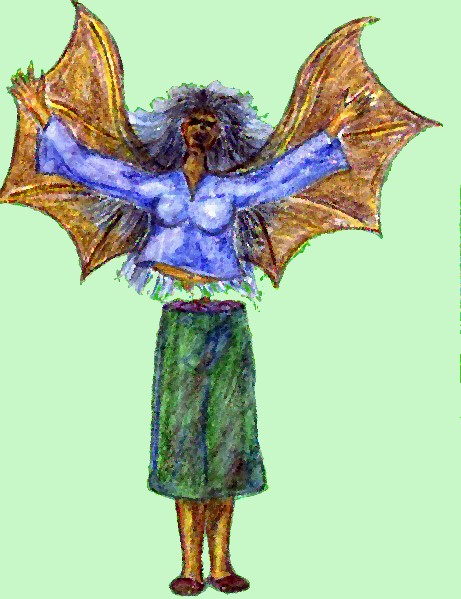 A popular aswang, or monster in the Philippines is the manananggal. This legendary vampire, also known as the Tik-Tik, takes on the form of a beautiful woman by day and turns into a monster by night. She primarily seeks out pregnant women, and uses her long tongue to consume the fetus, and many miscarriages are blamed on her. The Tik-Tik is most famous for splitting her body into two, leaving her lower half behind and flying off on her bat-like wings. The only way to kill her is to find her lower half and douse it with salt or garlic, which does not allow her to reattach her body in the morning. Either way, I certainly wouldn’t want to find her bloody body out in the open…

America: The Lost Dutchman Mine

The Superstition Mountains of Arizona holds many secrets, but the legend of the Lost Dutchman Mine is perhaps the most well-known and tantalizing of its tales.

Most versions center around Jacob Waltz, a German immigrant who came to America in search of fortune. Unlike most, he found it. Said to have discovered a particularly rich vein of gold, Jacob would ride into town on his donkey and pay for supplies with chunks of ore. And though many followed him into the unforgiving wilderness to claim his gold for themselves, Jacob always lost them.

Even now, his ghost fiercely guards his treasure, leading seekers astray much as he did in life. That’s the legend anyway. To this day, no one has ever found the fabled mine despite numerous maps claiming to show its location.

This site uses Akismet to reduce spam. Learn how your comment data is processed.